Apple’s Mac OS X Lion has been out for a year now, and while things have definitely settled down since its initial release, Lion was a sea-change from previous versions of Mac OS X, and there was a lot of grumbling about it. But there’s good news, and that news is that Apple seems to have addressed many (if not all) of the concerns people were having with Lion. And let’s face it, at a penny short of $20, upgrading to Mountain Lion is getting a slick operating system for the price of shareware.

If you’re upgrading from Lion, the process will look familiar, and the interface changes won’t be that jarring. Apple has adopted a policy of yearly OS upgrades, with major releases happening every two years (the big cats, if you will), and minor, more iterative, releases happening on following years, hence Snow Leopard for Leopard, and now Mountain Lion for Lion (get it?). Aren’t they out of large cats by now? How about large, yellow fowl? Seems to me the only place to go would be OS X Sneetches. The next minor iteration would be OS X Star-Belly Sneetches. Works for me.

If you’re upgrading from Snow Leopard and you’re expecting to pop down to your local Apple store to pick up the boxed upgrade, you’re either in for a disappointment, or you will be delighted about how easy Apple has made it. No longer will Apple be using physical media for OS distribution. It’s all done through Apple’s App Store, so if you don’t have an Apple ID (and who doesn’t?), it’s time to get one now.

And one more thing before we dive in. Apple seems to be subtly rebranding OS X, because now it’s simply OS X [insert cat name] rather than Mac OS X. So in the future, will Macs be, well, Macs? I mean, when was the last time you heard Apple or anyone else say “Macintosh” to describe these computers?

Even more good news is that Mountain Lion’s software license is good for 5 Macs, so at $4.00 per seat it’s an even better deal.

Now for some hard truths. The biggest is that the list of the hardware on which Mountain Lion will run is a whole lot shorter than the list of hardware on which you’d expect it to run. The reason is a bit technical, so bear with me. Apple switched from a 32-bit kernel to a 64-bit kernel in Mac OS X a few cats ago, but until relatively recently hasn’t had hardware across the line that could run it. What that meant practically speaking for Apple’s OS team was that, depending on your hardware, OS X would run in either 32-bit mode or 64-bit mode. But now Apple has stripped out all the 32-bit code from Mountain Lion and only Macs than can run Mountain Lion’s 64-bit kernel will run this OS. So my poor 2007 Mac Pro didn’t make the cut. Fortunately, the App store was polite enough to tell me that when I went to upgrade.

So here is the short list of the hardware on which Mountain Lion will operate:

If you’re unfamiliar with how to tell what hardware you have, it’s as easy as selecting System Info from the Apple menu, then clicking the More Info button.

You may now be asking yourself, does my favorite application now have to be 64-bit to run on Mountain Lion? The answer is, nope. I’m running Adobe CS4 just fine on my computer at home with no complaints.

Ever since System 6.08 rolled out back in the day, the first place I go after I’ve installed a shiny new version of the Mac OS is the system preferences area (called the Control Panel back then) which, in OS X, is named System Preferences. Selecting that from the Apple menu reveals many of Mountain Lion’s new features. I’ll touch on a few of them.

Hidden away in the Security & Privacy system preference is what Apple calls Gatekeeper. It’s Apple’s attempt at a level of security from malware and the like by limiting the sources from which your Mac will accept application downloads. Apple has registered and identified known software developers, the list of which it checks against when you go to download an application. The default is Mac App Store and Developers, so if you have that checked and you try to download an application from an unknown source, Mountain Lion will hold you up. If you’re satisfied that the sources from which you’re downloading applications are okay, then feel free to check the Anywhere radio button and Gatekeeper will release control to you. 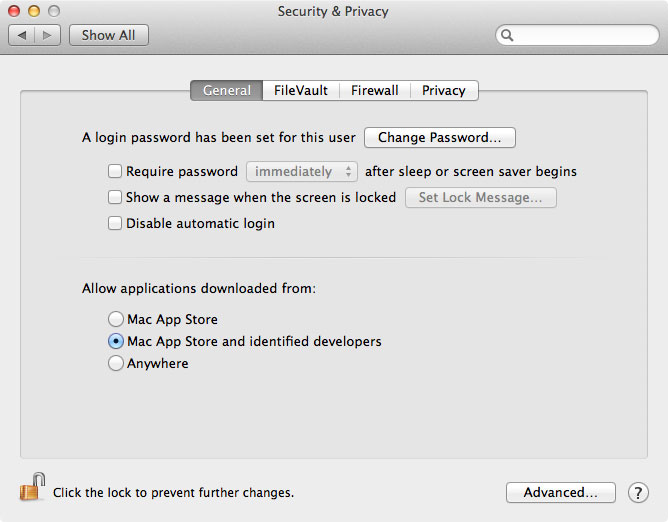 In keeping with Lion’s move toward integrating popular features of Apple’s mobile operating system, iOS, into OS X, Apple has ported a number of iOS features over to the Mac. If you’re familiar with Growl, then you already understand the new Notification Manager’s purpose, although its integration is more comprehensive and tightly embedded into the OS itself. If you have no idea what I’m talking about here, imagine a little popup box appearing in the upper-right hand corner of your screen notifying you when various events happen, like a new email or an appointment reminder. Looking at the preference pane is a fair indication of what kind of events will merit notification, based on which application wants to tell you something. 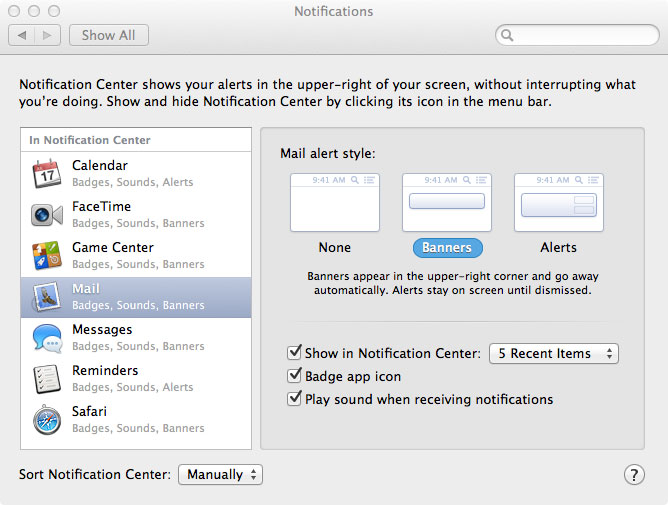 At this point it should not be surprising that MobileMe is gone. Apple officially shut down MobileMe at the end of June, and all that is left is iCloud. Make no mistake, I think there’s a bright future for iCloud, but right now I’m missing a few features from MobileMe (particularly the free web site I built when I was playing around with iWeb).

Even so, Apple has written APIs for developers to hook into iCloud and integrate it into their applications. I have to say, it’s very nice to be able to access the same document from three different devices: my Mac Pro at work, my sexy iMac at home and my bueno sexy iPad. Si, me gusta.

Not that you can’t do that from services like DropBox, which I also use, but there’s a lot to be said for OS integration out of the box (as it were). Still, I won’t be giving up DropBox any time soon. It’s just too handy to have it as part of the file system, accessible by any app at any time. That can’t be said for iCloud, at least not yet.

And, of course, this is where we have potential issues, as various companies attempt to monetize, or simply do the value-added dance with, the the so-called “cloud.” Will Adobe, for example, adopt iCloud, or will they stick to the cloud strategy they have, or some combination? From our point of view here at Word Wizards, if Adobe isn’t on board with a particular Apple technology there’s a good chance it’s going to get ignored, or at best used sparsely. We live in InDesign, and unless or until Adobe thumbs its nose at an entire industry the way Quark did years ago, as they roll, so do we, for, we hope, the better.

It’s time to embrace “natural” scrolling. Sooner or later Apple is going to take away the reverse-scrolling option that you’ve been using forever, but really, it takes about a day, if that, to get used to it. Maybe this is Apple’s insidious ploy to keep you off Windows, because every time I go over to a PC I always wonder why browser windows don’t scroll the way I expect them to. Then my brain explodes. You win this time, Apple. 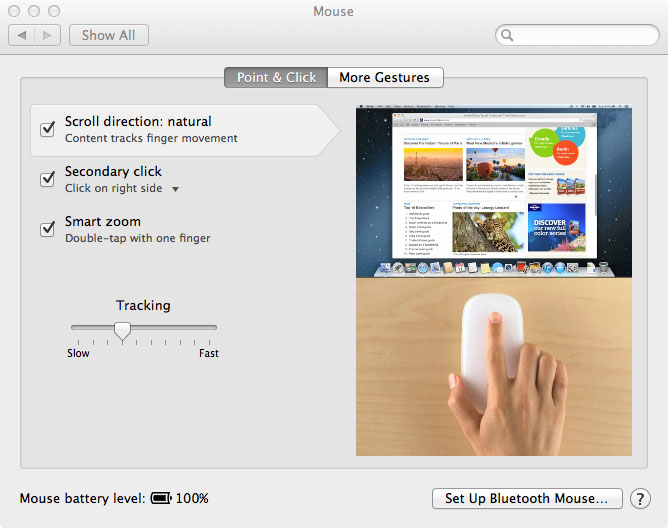 Gone is the Speech preference pane, and in its place is Dictation & Speech. I can safely say that of all the Mountain Lion features, this is the one my college-age son loved the best. Why? Because it’s endless fun, apparently, to swear at the computer and have it display each word perfectly for you. Dictation works amazingly well if you’re not tripping over your words, as I regularly do, but the caveat here is that to enable the feature, Apple wants the contents of your address book. The idea, apparently, is that you’re going to be saying those names a lot so it’s a good idea for Apple to have them on file for you. Personally, I’m not so sure, but the feature is so cool I went into privacy-denial mode and haven’t looked back.

The interface and mechanism for software updates has changed. The App Store now handles that. That makes sense; if you’re going to buy your operating system from Apple’s online store it’s entirely appropriate that that store handles the update process. And it does it just as well as you’d expect, if you have an iPhone or iPad, which is to say very nicely. No complaints here.

Now it’s Accessibility and it lives on the System shelf of the System Preferences pane, with a redesigned interface.

One of the biggest problems many people had when upgrading to Lion was that Apple took away several features from Spaces and rechristened it Mission Control. Instead of a grid, Apple flattened it out and made all virtual desktops accessible in a more linear fashion. Press a hotkey and all your desktops are revealed.

There’s now a new preference: Group Windows by Application. It’s on by default to mimic Lion’s behavior. When it’s on and you trigger Mission Control, all the various windows you happen to have open are overlapped, grouped by application, in miniature. Turn the preference off if you want to see the complete window, although it looks a bit haphazard. But it’s still not Spaces. As always, though, when Apple falls short some plucky developer wades in and saves the day. TotalSpaces pretty much fills the gap. I don’t know what I’d do without it. 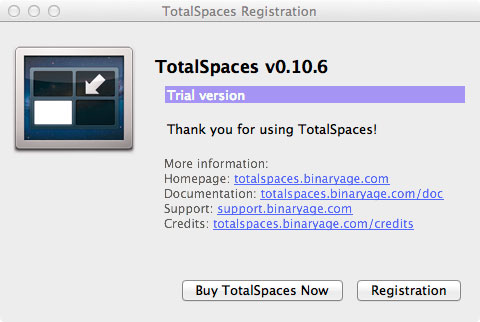 You liked it on your iPhone, so here it is, fully integrated across all your devices and computers through iCloud, of course.

If you’re looking for iChat, you will search in vain. It has been disappeared in favor of Messages, which is like iChat, except it’s also like Messages on your i-device. Nothing really to report here, except it’s another interface you’ll need to poke around and learn. Fortunately the learning curve for this isn’t terribly steep.

Integrated throughout Mountain Lion, the Share button enables you to access social media from just about any application. This seems more like a consumer option rather than something that a pro might use, but if your job is posting stuff to Twitter (and Facebook, come Fall), your job just got easier.

So far, I’ve been happy with OS X Mountain Lion. I think it’s very stable, which makes sense, since it’s building off of Lion the way Snow Leopard built off of Leopard. It even feels faster, which also makes sense, because Apple did a fair amount of code optimization with the graphics APIs. And unlike Lion, I haven’t seen any problems with NAS drive drivers, which was a big reason we didn’t upgrade to Lion for a while. I have yet to encounter a show-stopping bug, like the Safari text-rendering fiasco in Lion. Overall, I’d say that for a point-zero release, Apple has done a fantastic job in terms of speed and stability. I really don’t see an issue with upgrading right now, if your Mac supports it.