Silverdocs 2012 has sadly come to a close. After a week of festival festivities, the hard working team that put together this incredible event can finally take a load off. I had an opportunity to see some of the action going on behind the scenes and I was thoroughly impressed with the level of organization, professionalism, and coordination that went into making this event a success on all fronts.

Chances would have it that one of my friends from high school wound up as one of the volunteer coordinators for the Silverdocs film festival. She was kind enough to allow me to take a peek at the action going on behind the scenes. I met her outside of the Silver Spring Civic Center on a sweltering 90 degree day. Inside the Civic Center, a bustling wave of festival activity kept everyone busy. The volunteers were out and about, performing various duties from greeting newcomers, to helping people find the right room. Even though it was hot outside, inside it was cool and collected, with every event running smoothly because it had be planned to the um-teenth degree. My friend and I even stopped by the HD photo booth and took a quick snapshot for posterity’s sake. 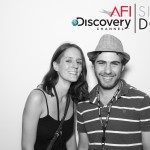 As always, behind any great production, there are some very dedicated folks in an office somewhere pushing paper to keep the show on track. I got a rare glimpse inside the Silverdocs offices and got to see a side of the festival most people never witness. Managers kept their cool as they doled out responsibilities and tasks to volunteers. Coordinators put their game faces on and made sure there were enough volunteers at each event to handle the crowed. Supervisors delegated, judges awaited their next screening, and all the while, movies played on several screens in several locations. Needless to say, it was quite an outstanding organizational effort on the part of the Silverdocs crew, AFI, and all of the numerous sponsors of the event.

The party doesn’t stop when the sun goes down at Silverdocs! Those individuals who purchased a festival pass, worked on a film entry, and or anyone else who helped put Silverdocs together were wined and dined with lavish after parties each night. I got to check out the scene at one of these swanky parties where filmmakers and festival VIPs could mingle and unwind from the stress of the day. Silverdocs even rented out the Fillmore across the street from AFI for late night fun till 2:00 AM and beyond! It was very cool to have the opportunity to get this close to the heart of such a well done production!

Another Silverdocs year has come and gone. Winners were declared, hearts were moved, dreams were made and dreams were broken. Word Wizards is looking forward to next year for more incredible documentary production from the local and national talent that converges once a year on Silverdocs. Thanks to all of the volunteers, hard working supervisors, and sponsors who made this event possible once again. See you all in 2013!