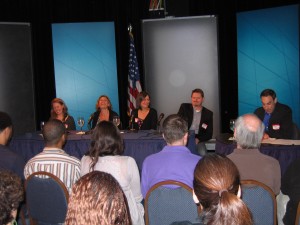 Since we here at Word Wizards Inc. go through hours of transcription each day we know that while making film and video is hard, the toughest part is actually getting someone to green light your pitch so you can actually get the chance to make it. We all know that making that pitch can be difficult, awkward and just plain nerve racking. Recently TIVA and The National Press Club Studios presented a packed workshop to give people valuable pointers on how to go about making a pitch guaranteed to be a winner. The panelist on this panel included Jane Latman, Senior Vice-President for Development at Investigation Discovery, Amy Savitsky, Vice President of Development at TLC, Genevieve Crouteau, Vice President of Development at Story House Productions and Kip Prestholdt the owner and Executive Producer at Lucky Dog Films.

One of the most important tips to consider when you’re putting a pitch together is to make sure you have an interesting character that will hook people into the show. Setting and content don’t matter quite as much as having characters a viewer would want to keep watching. You also need to make sure you have a decent presentation that gives you plenty to discuss with a network person. Like I said characters are important but you do want to have the most complete package to present and it’s a good idea to have a rough estimate of the budget need. While you don’t need to know the exact numbers, you should have a general estimate so the person you’re pitching to gets a good idea of just how costly the work you’re presenting would be. This should go without saying but it never hurts to practice the pitch with a friend so you’ve gone over it and know it forwards and backwards.

If you’re trying to get in touch with a network and don’t have an agent, then the ideal person to look for would be the development manager at the network or someone with the word “development” in their title. It can also pay off to try and reach a network through their general contact e-mail address since most of the time, pitching e-mails will be forwarded to the appropriate individual. If you’re e-mailing a sizzle reel or presenting one, make sure it’s less than 6 minutes long, has a link to the rest of your work and that it showcases your characters. When you do try to contact networks, it’s often good to lead with the reel so they get a sense of your project. When you do land that coveted appointment to present your ideas to someone, make sure you go in with a few back up pitches in your pocket. If you present your pitch and the executive immediately says no, you need to have another idea on deck or else the meeting can get awkward quickly with nothing to talk about. It also doesn’t hurt to ask why they said no so you can know what to work on for future pitches. Also learning to take no for an answer is important skill to have as well.

You also want to make sure your pitches are tailored to fit which ever network you’re making that pitch to. If you’re presenting to some place like Investigation Discovery, make sure your show seems appropriate on a network that spotlights crime dramas and true stores with twists and turns. Don’t take a gritty criminal show to a place like TLC which caters mainly to women, targets the heartland states and is toned towards fare with heart, authenticity and the OMG factor. You must research the network beforehand so you can get a feel for it and be sure that your idea won’t seem like an odd duck to them. It may sound like common sense, but many producers have taken ideas that they thought were sure fire hits and got shot down because it didn’t fit the network image. If you do make your pitch and then don’t hear anything back for a while don’t get too discouraged, as getting key decision makers together and deciding on someone’s idea can take a while.

After Making Your Pitch

After you make your pitch, the executive you pitched to may take your idea and decide whether it passes for having some promise or potential. The next step is for them to meet with other department heads. They will discuss your pitch and ultimately decide whether it’s good enough to go forward for green light and production. If they do decide to go forward, most likely the network will choose the partner or production company that you will be working with. If you have lots of producing experience then you may be given an executive producer position on the project and if you’re still relatively new to the business, you may be given an associate producers credit with someone more seasoned helping guide you. While some networks such as Investigation Discovery do both commissions and co-productions with producers, many networks tend to do more commissions and pay a one-time amount.

During the workshop, the conversation went into the realm of scripted versus reality with the consensus that even though scripted is not the priority at many networks, it’s becoming a big buzz word. Comedy was also agreed to be another big buzz word as its becoming popular too. If you’re just one person, then it can be incredibly difficult to reach anyone so it pays to find someone who has the right connections and can form a partnership with you. Another key point made was that if you have some unique character that you want to base your show around, get them to sign an agreement as soon as possible and try to do the same with locations. All the panelists had great cautionary tales about how much of a rat race it is to get characters and places secured before you lose them for good. It also gives your pitch a nice added bonus if you have exclusive access to characters and places that others don’t.