Each year Word Wizards is privileged to recruit talent at a media related Job Fair sponsored by Women In Film and Video of DC (WIFV.)  On March 24th, at the Luke C. More Academy, in SE DC, prospective employers from across the spectrum of film and video production came to collect resumes from energetic job seekers.

Recruiters for media production professionals in education and public sector broadcasting were represented by American University, WHTU Howard television, Media Concepts, PBS, C-Span and AFI Silver Docs. Major production houses such as Henninger Media, Interface Media Group, and Maslow Media Group were looking to hire employees related to production and post-production. Boutique production houses such as EFX Media, Sapling Pictures, Team People, Will Interactive, and “Yoh” were snapping up resumes from video editors, producers, camera people and production assistants. One of the finest audio post houses in the DC area, Ott House Audio, was looking for a few good sound techs. Hundreds of recruits braved the rainy weather to present their skills and talents before the recruiters. 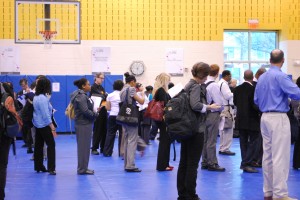 Word Wizards sought employees and contractors for our own special niche in the media production world.  We are always looking for fast, accurate typists for our core service, audio and video transcription.  Many production professionals start their careers as interns transcribing sound bites; thus they are a natural fit to work for us.  Some candidates were extremely proficient, exceeding 100 words per minute for their tested typing speed.

Many others have produced logs, closed captions, and subtitles during their time within the media production industry. Several of these individuals found that they can earn some cash from us typing and logging, while awaiting the production job of there dreams.  Along with four fast typists, we’re considering hiring a Spanish and Arabic translator to add to our translation capabilities.

In addition, Word Wizards also does a lot of graphic design work for print and digital media. Some very impressive resumes were collected form people, who work with InDesign, After-Effects, Quark, and PageMaker.  These highly trained graphic design specialists are vital. When a client requests something special, we have many different outlets to find the right designer for the project. 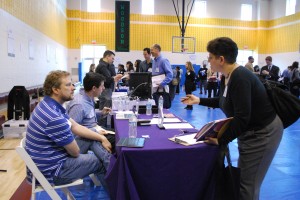 Word Wizards would like to thank Women In Film and Video for gathering such an impressive group of talented people for the recruiters to review.  Qualified producers, video editors, camera people, audio and graphics professionals also owe their gratitude to WIFV for making the event happen. It is our fondest hope that the Job Fair will remain a feature of the media production landscape far into the future.