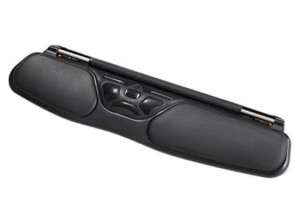 While there are many who think that professionals in the media-and-video-production industry don’t spend much time behind a desk and computer, they could not be more wrong. Media professionals can end up spending just as long as any information worker, and often even longer, slaving away on a computer behind a desk. And as some people may or may not know, long hours at a desk and in front of a computer screen in any type of work can have some very serious repercussions on a person’s health, causing back, shoulder, elbow and wrist pain, among other issues. The human body was not made to be in the same position every day. Doing the same motions that put so much cumulative strain on it that can ultimately lead to serious issues such as carpal tunnel syndrome or tendonitis. 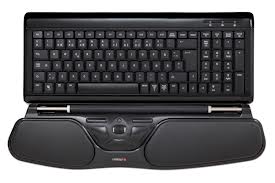 Fortunately for those slaving away in this less than ideal situation, a number of ergonomic keyboards and mice have been coming out in recent years to help reduce the strain. One of them is the RollerMouse Free2 designed and made by Contour to help combat this problem. The mouse, which sits at the base of the keyboard, eliminates the need for the user to constantly reach up and over for the mouse. It puts less strain on hands, wrists, elbows, and shoulder. You move the mouse by utilizing a roller that spans the width of the keyboard, and sits between you and the keyboard. Centralized buttons control the functions of clicking, right-clicking, scrolling, copying, pasting and double-clicking. The double-click button, as well as the cut and paste, reduce the fine motor movements required by a traditional mouse, which can be tough on the joints.

Here at Word Wizards, one of our very own has been using the RollerMouse Free2 for a few months and having great success with it. Devra G., Web Developer and 508 Accessibility Specialist, has suffered wrist, shoulder and elbow pain for a number of years from using a standard mouse. To help alleviate these problems she’s tried various mice and made a big leap forward by using a roller-bar mouse.

Devra’s first big improvement in mousing was using a roller ball mouse, which moves the cursor via thumb movement, not shoulder movement. Moving the cursor with the thumb reduced some of her shoulder pain. But since she still had to reach over to the right, her shoulder was still aggravated.

After some time, Devra ended up seeing a physical therapist about wrist, elbow, and shoulder pain. It was the physical therapist who suggested getting a roller-mouse after telling Devra the wrist and elbow issues were coming from her shoulder.

Heeding this advice, Devra purchased the first roller-mouse model, the RollerMouse Pro2 (retail $199.95). While she did enjoy this model, it ended up not being the best working fit since she uses two monitors and needed something that can handle a larger pixel range.

Devra recently got the newer module, the RollerMouse Free2 (retail $239.95), which she feels has reduced her shoulder pain significantly. The roller on this model is also wider and easier to access.

While using ergonomic mice can be a great alternative for some, there are a few basic tips you can follow with any mouse type that should help reduce strain on your joints. A good one is to take a few minutes break every hour, and stretch your wrists, arms, and shoulders. This will help you relax and make sure your body does not stay in the same position for too long. Another is to occasionally get up and speak to colleagues instead of just sending them an e-mail, since moving around pumps new blood into your body and gives you more energy.