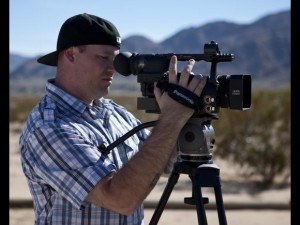 With Memorial Day soon upon us, our thoughts go to those who made the ultimate sacrifice in the line of duty to defend our country. I’ve also been thinking about those other brave individuals who fight in combat and are wounded but are able to make it home back to the U.S. What are they supposed to do when they get back after seeing all the chaos of war and how are they supposed to get used to a regular life again? Fortunately, there are some truly great organizations that are more than happy to help train these individuals in new lines of work so they can start to rebuild their lives. One of these groups is the Wounded Careers Marine Foundation whose media boot camp trains returning and wounded marines for new careers in video and media production.

Documentary filmmaker Kev Lombard first had the idea to start the program when he was asked to film the stories of wounded veterans at military hospitals in 2006. He wanted to teach them how to tell their stories and decided to partner with his wife Judith Paixao to create the program. The couple uses a mix of corporate and private donations to fund the media course which is composed of two weekly sessions that both last ten weeks. The Wounded Careers Marine Foundation Media Program is headquartered in a camouflage-painted building on a San Diego production lot. While the expectation isn’t to turn out the next great film visionary like Martin Scorsese or Steven Spielberg, the aim is to give these heroic veterans the proper skills to become a camera or boom operator and earn a well-paying job.

Students learn all about the production and video business from 30 film professionals who are happy to pass on their knowledge. Some of the teachers include Amy Lemisch of the California Film Commission, Barry Green, an Emmy award-winning producer and Levie Issaaks, a Vietnam war veteran who is now an Emmy award-winning director of photography with work that includes Malcom in the Middle. These instructors have the veterans use equipment such as Panasonic HD Camcorders and MacBook Pros to learn skills such as editing, cinematography, lighting and sound design. The students learn nuts-and-bolts coursework that leaves them with solid skills not found in many college film schools, almost like an apprenticeship. Word Wizards Inc. thinks these kinds of programs are great since they really give back to those who have sacrificed a lot to fight for our country.