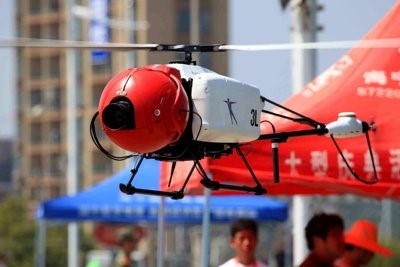 One of the most exciting new tends in filmmaking today is the use of camera-equipped drones. These inexpensive Unmanned Aerial Vehicles, or UAVs, are more budget conscious than helicopters for capturing the overhead excitement of a vehicle chase or other outdoor scenes. Using a versatile GoPro camera on a UAV, filmmakers can easily record awe-inspiring aerial footage at a safe distance. But there are legal questions about the winged wonders: where can you fly drones and do you need a pilot’s license? At a recent WIFV panel discussion at Interface Media Group, Jim Williams, head of the Unmanned Aircraft Systems (UAS) Integration Office, and Lauren Reamy, representative of the Motion Picture Association of America (MPAA) before Congress and federal agencies, answered audience questions.

Jim opened the panel discussion by describing how his office is working with the Federal Aviation Administration (FAA), a division of the Department of Transportation (DoT), to finalize a new set of rules dealing with the commercial use of drones. The new rules are scheduled for release later in the year, around November 4th. The FAA will also promote a safe, efficient, and timely integration with the UAS Integration Office. Jim also revealed additional regulations called Section 333, which address dangerous jobs like flare stack inspections on oil rigs. Flares are potentially dangerous for manned craft, but not for unmanned drones.

Lauren Reamy spoke about some amazing video footage—now gone viral—taken on the 4th of July by a drone flying through the fireworks and showing how effective drones can be when compared to manned craft. Unlike manned aircraft, drones do not create a wind effect, do not need a large support crew, and do not use gasoline. Some films using drones are Skyfall, Transformers, and The Smurfs 2. The MPAA supports the use of drones in American productions and hopes the new rules from FAA will help with scripted film and TV; reality shows are not included.

The panel then opened up to questions from the audience. The first inquiry came from a hobbyist who wondered if she could sell footage taken by a drone. Answer:  Yes, she could sell her footage once or twice, but after that it crosses into the commercial realm, which is prohibited. Another question: Is there a general fee for obtaining your license and registering your drone? Answer: To register is about $5, but the cost for a private pilot’s license or certification is regulated by the FAA. Before launching a drone, always assess the surroundings, and plan to fly your craft a minimum of five miles from an airport. (At Ronald Reagan National Airport, you need to be at least 15 miles away). If pilots fly within these boundaries, they may expect a visit from the local authorities, who may confiscate the footage and maybe even the drone. Pilots should always have a line of sight of their craft.
Establishing the rules for usage is key to assuring drones or unmanned aircraft are used responsibly and do not endanger manned aircraft or act as peeping toms. To read the rules and make comments, log onto www.regulation.gov. Even though regulations fluctuate around the world, a small contingent of the UN are working on global rules. Jim closed the panel discussion by saying he is hopeful that within about two years, most professionals will be able to sell videos taken with drones commercially.